Bob holds a Master of Landscape Architecture from Louisiana State University. He worked professionally in Wisconsin, Florida, Alabama, and Fayetteville, AR before joining the staff the University of Arkansas. Beginning in 1994, he served as curator and then associate executive director of Garvan Woodland Gardens. During 20 years of service he helped build new gardens and facilities totaling over $18 million.

Bob has published articles in a number of regional and national publications and presented programs at several state, national and international conferences.

Bob came to Fort Worth as director of the Botanic Garden in April 2015 and is currently focusing on getting to know the Garden and its many supporters. He is enjoying learning the large and varied flora of Texas. 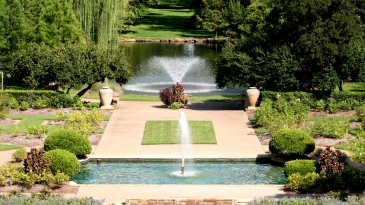 Bob Byers is the curator of Garvan Woodland Gardens.

Since December 1992, Janet has been the Extension Horticulture Specialist in the State office of the University of Arkansas Cooperative Extension Service. Janet serves as the Coordinator of the Arkansas Master Gardener Program. There are over 3300 MG volunteers in Arkansas. In addition to the Master Gardener program, she is also the consumer horticulture specialist, responsible for providing information to the 75 counties for all areas of horticulture related to home gardening, with an emphasis on ornamentals. Media work includes weekly gardening columns in the Arkansas Democrat-Gazette and monthly columns in Arkansas Gardener and Arkansas Living magazine. She has been featured in Fine Gardening and Organic Gardening magazine. A weekly television spot airs on KATV TV Saturday morning taped at Garvan Woodland Gardens in Hot Springs. She was the 2003 Recipient of the John White Award for Excellence in Extension Education and the 2010 Recipient of the Outstanding Extension Educator from the American Society for Horticulture Science. Her first book In the Garden was released in June 2010.

Prior to her role as Extension Horticulture Specialist, Janet served as County Extension Agent – Agriculture for the Pulaski County office of the Cooperative Extension Service where she started the Master Gardener volunteer program in 1988.

Janet is married with two grown children and three dogs. 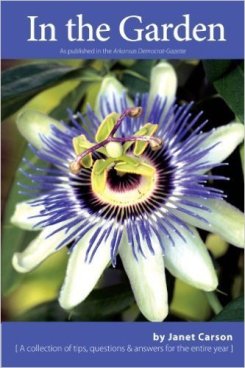 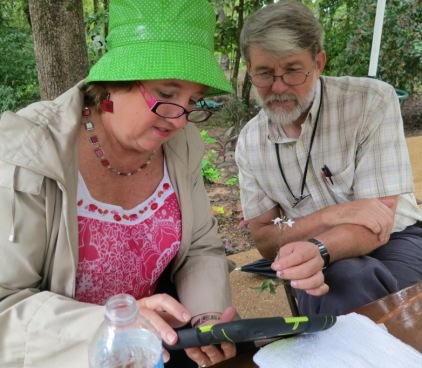 Steven L. Chamblee has been active in horticulture for almost 40 years.  Developing his love for plants by transplanting trees with his father back in the late 1970’s, Steven soon formed Southern Lawn Care, a landscape maintenance company.   In 1986, he joined the Fort Worth Botanic Garden as a gardener.  His natural curiosity led him to enroll in Tarrant County Junior College, where he earned the Associate of Applied Science degree in Horticulture.  Still working full-time at the garden, Steven earned the Bachelor of Science degree in Horticulture from Tarleton State University.  He then received a fellowship in the prestigious Longwood Graduate Program, and earned the Master of Science degree in Public Horticulture Administration from the University of Delaware.

After graduate school, Steven served as the Native Plant Horticulturist for the Heard Natural Science Museum in McKinney, Texas, before returning to the Fort Worth Botanic Garden as the Grounds Manager.  Later, as the Education Director for the Garden, he focused on developing a variety of self-sustaining educational programs.  Currently the Horticulturist for Chandor Gardens in Weatherford, Steven uses his collective experiences to bring vibrant artistic expression to the garden and inspired educational opportunities to the community.

Steven is an Adjunct Instructor for Tarleton State University.  He served as Consulting Editor and Writer for Neil Sperry’s GARDENS magazine for more than 15 years, also writing a monthly e-newsletter column entitled “Native Son.” He loves travel (primarily to gardens), photography, the Oxford comma, and road-tripping to his lectures and presentations across Texas.

Dr. Kelly is responsible for providing statewide leadership in a comprehensive horticulture program serving industry and consumers. Duties include providing statewide leadership to the Master Gardener and Junior Master Gardener programs and serving as a resource to County Extension Agents. She has her M.S. and Ph.D. in horticulture from Mississippi State and has worked for Extension for 13 years.

Lelia authors numerous Extension publications and conducts short courses, workshops, and Master Gardener programs statewide. She is a regular contributor to Mississippi Gardener magazine and also contributes to newspapers and other gardening publications.   She is a frequent speaker at garden events in the Southeast.

Laura M. Miller provides informal educational programs and problem solving services to all aspects of the commercial horticulture industry from green industry professionals to fruit, vegetable, and ornamental plant growers. Prior to taking on her present position in March 2008, she was a University of Florida/IFAS Commercial Horticulture Extension Agent for seven years.

A sixth generation Texan, she is a graduate of Eagle Pass High School who earned a Bachelor of Science in Horticulture and a Master of Education in Agricultural Education from Texas A&M University in College Station. She is a Texas Certified Nursery Professional and serves on the boards of Region V of the Texas Nursery and Landscape Association, the Cross Timbers Urban Forestry Council, the Texas County Agricultural Agents Association, and the International Plant Propagators’ Society-Southern Region of North America.

Prior to this position, he was the regional Plant Pathologist based at the Texas AgriLife Research and Extension Urban Solutions Center in Dallas where he created several educational programs to encourage the public to develop an appreciation for plant diseases, their impact, and scientifically sound management methods. His current professional interests include development, validation and implementation of existing and new plant disease diagnostics methodologies which includes molecular diagnostics.

More information about the Texas Plant Disease Diagnostic Laboratory can be found at http://plantclinic.tamu.edu.

Charles Porter is an award winning author, speaker, testifying real estate expert, and a full time Visiting Professor in the College of Education at St. Edward’s University. He also serves on the Advisory Council of the Briscoe Center for American History at the University of Texas. His newest book Sharing the Common Pool: Water Rights in the Everyday Lives of Texans (Texas A & M Press, 2014) is in the bookstores now.

He is also the author of Spanish Water/Anglo Water (Texas A & M Press, 2009) winner of the 2011 San Antonio Conservation Society Publication Award and the 2011 Texas Old Missions and Forts Restoration Association Book Award for outstanding published book contributing to a better understanding of Spanish Colonial Texas. He won The Texas Catholic Historical Society’s Catholic Southwest Journal of History and Culture 2009 Robert S. Weddle Award for the article “Querétaro in Focus: The Franciscan Missionary Colleges and the Texas Missions.” He won The East Texas Historical Association’s East Texas Historical Journal’s 2013 Chamberlain Award for the article “The History of W. A. East v. Houston and Texas Central Railway Company, 1904: Establishment of the Rule of Capture in Texas Water Law or ‘He Who Has the Biggest Pump Gets the Water’.”

His teaching awards at St. Edward’s University include the 2013 Hudspeth Award for Innovative Teaching, the 2011 St. Edward’s University Outstanding Adjunct Faculty Award, and the 2011 Best Adjunct Professor of the Schools of Behavioral and Social Sciences and University Programs.  Additionally, Porter was a 2008 Presidential Award Winner at St. Edward’s.   He was awarded the Peacemaker Award by the Austin Dispute Resolution Center in 2007.  He was elected and served as Chairman of the Board of Directors of the Austin Board of Realtors in 2007.

Justin Scheiner received a B.S. in Horticulture and Crop Science from Sam Houston State University in 2005. In 2007, he received his M.S. in Molecular and Environmental Plant Sciences from Texas A&M University. Dr. Scheiner earned a Ph.D. in Horticulture from Cornell University in 2010. From 2010 to 2013 he served as the Director of the Viticulture and Enology Program at Grayson College. Dr. Scheiner joined the faculty of the Department of Horticultural Sciences at Texas A&M as an Assistant Professor and Extension Viticulture Specialist in 2013.

Dr. Scheiner’s Extension activities include developing educational programming for prospective and current grape growers in the state of Texas and conducting applied research on best management practices for vineyards in areas of Texas affected by Pierce’s Disease. Dr. Scheiner also teaches HORT 416 Understanding Wine: From Vines to Wines and Beyond, and he is a member of the graduate faculty in the Department of Horticultural Sciences.

Mike Shoup has always had an interest in plants. With this in mind, he received his Bachelor of Arts degree in Biology from Trinity University and his Master’s degree in Horticulture from Texas A & M University. In 1976, a year after graduation he started Containerized Plants, Inc. which grew and sold woody plants and hardy, old-fashioned perennials, Texas natives and most importantly, neglected Old Garden Roses.

In 1984, he opened the Antique Rose Emporium which specialized in the re-introduction and distribution of these historic roses. This developed into display garden/retail centers in historic Independence and San Antonio, Texas. These unique retail centers consist of theme gardens showing the versatility of antique roses in garden settings. His work has been recognized in Smithsonian and National Geographic magazines and in many trade journals. His hope is that the beauty seen in these gardens will create resurgence in the preservation of these rare and beautiful roses.

Mike is a past president of the board of directors of the Heritage Rose Foundation, an organization dedicated to the preservation of Old Garden Roses. He has also written many articles and supplied numerous photographs for trade magazines and national periodicals on the subject of using Old Garden Roses in today’s gardens. He has written two books, Roses in the Southern Garden, published in 2000 and Empress of the Garden published in 2013. He co-authored with Liz Druitt Landscaping with Antique Roses, published in 1991.

Mike and his wife, Jean, have three children and are active in many organizations in Brenham including Unity Theater, Chamber of Commerce and Rotary.

Dr. Welch has been instrumental in developing the Texas Certified Nursery Professional program and assists that program within the Texas Nursery & Landscape Association. In 1986, he was presented the Arp Award by the Texas Association of Nurserymen for his contributions to the Texas nursery industry.

He has served on the Board of the Texas Garden Clubs, Inc. as Landscape Design Chairman for the past 30 plus years and has been awarded a Lifetime Membership in that organization. Bill currently coordinates the Landscape Design Study Courses with Texas Garden Clubs and presents their nationally accredited two-day courses every six months in College Station. Welch is a past president and an honorary member of the Board of Directors of the Southern Garden History Society. In Dr. Welch was made an honorary member of the Garden Club of America in recognition of his programs and writings on exploring and interpreting our gardening heritage. Zone 9 of the Garden Club of America recognized him for his contributions toward the preservation of our gardening heritage and later presented him with their Distinguished Service medal for his passion, knowledge and unselfish contributions in the name of horticulture. He also received The American Horticulture Society’s Great American Gardeners Award for his accomplishments in gardening communications. Dr. Welch has recently served as horticultural consultant for the Hermann Park Gardens in Houston, Texas.